My interest in zone/scale focus compacts and auto focus point and shoot cameras partly originates from Andy Warhol's casual use of the early auto cameras in the 1970s and 1980s.

A number of misconceptions have arisen over the years regarding this particular part of Warhol's photography.

One prevailing myth is the art historical overemphasis of his use of the Polaroid Big Shot and Minox camera. In fact, while the Big Shot was a very important camera in his oeuvre, he also made use of a wide range of early point and shoots from Canon, Chinon, Olympus and many more.

Regarding the often-cited Minox, Glenn O'Brien in his introduction to the photobook, Warhol's World, writes the artist found the camera too complicated to use. When autofocus cameras became available, he abandoned the Minox in favour of AF point and shoots.

Another Warhol essay, reports the artist received a Minox as a gift: "In 1976 Warhol was given a small Minox SLR (single lens reflex) 35mm camera by Thomas Ammann."

Minox never made an SLR.

Another art historian once wrote Warhol used throughout his career an autofocus Minolta SLR. Minolta did not release an AF SLR until 1985. Warhol would have used such a camera in only the last two years in his life (he died in February 1987). And indeed, we see him holding such a camera in his hands two months before his death. But it would have only covered a small period of his image production.

In short, there is a lot of misinformation about Warhol's camera use.


What follows is a small survey of photo-documentation of Warhol using a camera. I also have identified the exact models he holds.

Note, none of these images definitively prove he used the camera in his own work. They do, nevertheless, suggest a far wider range of cameras were available to the artist. 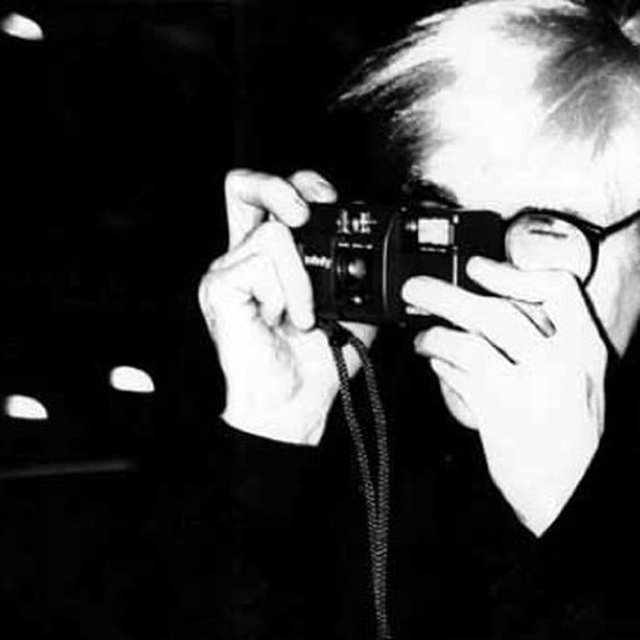 The image above shows Warhol using an early Olympus "weather-proof" compact autofocus. The Olympus AF-1 aka Infinity laid the groundwork for Olympus's classic Infinity Stylus and Infinity Stylus Epic which all featured the ground-breaking clamshell design. The camera was available from 1986 and, like the Minolta, would have been a camera used in his later career.

On his death, I believe it was Evelyn Hofer (among other photographers) who was invited to photo-document parts of his home. In the dining room, as shown in the book Obsession Possession, were several blue and white Olympus boxes (I believe they hold Olympus AFLs).

(For an interesting academic work on Warhol's camera use, visit William Ganis's paper on the topic.)

One of the most recent popular images of Warhol with a camera has to be cover image of Ron Galella's book, Warhol by Galella: That's Great (top photo). In the photograph, Warhol is attending the 1985 Annual Council of Fashion Designers of America Awards Dinner at the Metropolitan Museum of Art. The camera is an Olympus AFL or Picasso. 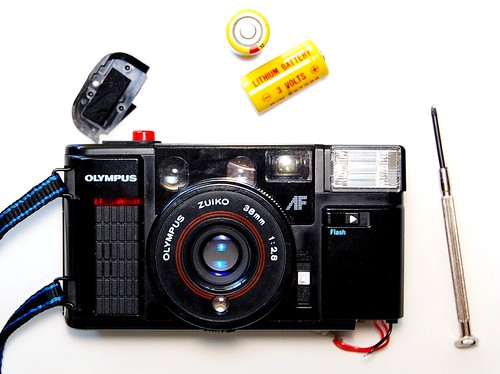 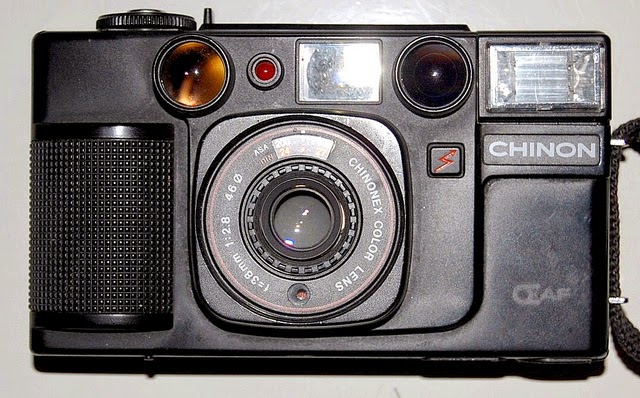 The above camera is a Chinon 35F-MA compact with infrared focusing. It appears repeatedly in Chris Makos photobook, Andy Warhol: China 1982: The Photographs of Christopher Makos.

Warhol, in interview, talks about using Konica cameras. Konica was the first company to introduce an onboard flash in the form of the Konica C35 EF or the Pikkari. Below is Warhol holding a Konica C35EF (left) and a Polaroid SX-70 (another commonly cited Warhol caera).

Below you will also my own C35for comparison. 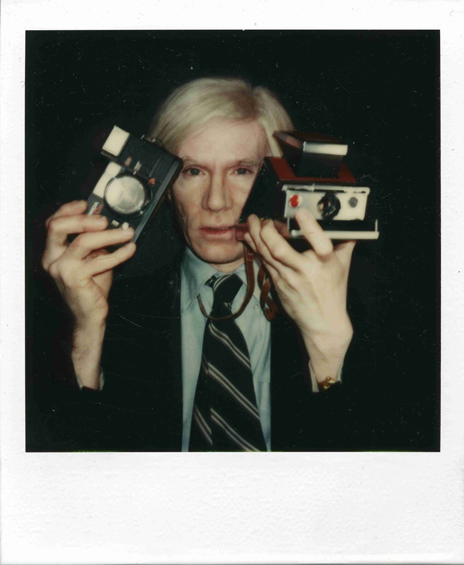 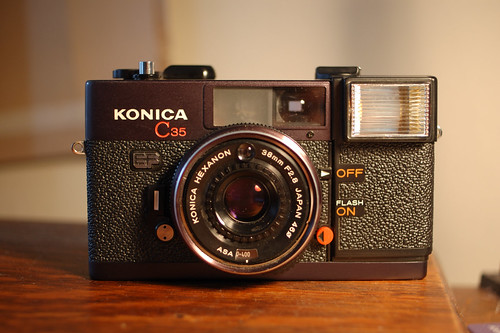 The Konica can be seen in his hands while standing next to Bianca Jagger in 1978 photo taken by Ron Galella. Warhol said, "I love the new, small, automatic-focus 35mm cameras like Minox and Konica."

Of course, neither of these cameras were autofocus. They were auto-exposure. Konica autofocus camera, the Konica C35 AF, does appear in his hands in later photographs but the AF does not sport the distinct orange "C35" of the 1978 image.

This post has been edited for accuracy June 3, 2018. It is one of the most popular on this blog. The fascination with the means and methods of Warhol's photography continues to fascinate people.

One of the aspects I liked best of his camera work is his penchant to hold or stand to one side of a camera, the way a photographer would with a large view camera. I believe it produced a type of connection and directorial relationship with the sitter/poser rarely captured when the shooter stands behind the behind and views the subject through a viewfinder or prism.

Roger Tang said…
I remember that Andy Warhol carried an Olympus AF-10 (the 35 / 70 twin-lens camera) too but can't be sure about that. Do you have any ideas / literature / photo links on it too?

JJ Lee said…
Hi Roger. According to the site, the AF-10 TWIN came out four years after Andy Warhol died in 1987. There was an earlier twin lens camera, the AF-1 TWIN but that too came after Warhol died.

But thanks for you question. I'm certain there's lots of photos of Warhol holding cameras I have yet to catch online. Keep looking! JJ
September 6, 2013 at 12:41 PM

JJ Lee said…
I should add this is a chance you may have seen Warhol holding an Olympus AFL-T (for twin). http://www.olympus-global.com/en/corc/history/camera/popup/zoom_afl-t.html

Thanks so much for your time checking thru'. Really appreciate it!

Have a great day ahead!

Do you know what camera was used by Warhol, when he traveled accross America? The book is "America" by Andy Warhol.
June 21, 2018 at 6:10 AM

JJ Lee said…
The images were collected over ten years of Warhol's practice. I haven't gone through the book before. I should get it. But I'm pretty sure he used a wide range of cameras.
June 21, 2018 at 11:42 AM

JJ Lee said…
There are some things that are common among the 35mm film images that seem to use a flash: they have a focal length of 38mm, though he did use the Canon ML which had a 40mm, and they had a maximum aperture of f/2.8. If you want that look, I would say shoot black and white, flash on all the time.
June 21, 2018 at 11:49 AM

Lucy Vancouver said…
Interesting blog, thank you for sharing the story about Warhol and his camera
October 20, 2018 at 1:05 AM

Mahfuz Shoaib said…
My father has a Konica C35 EFP, after all these years I feel fascinated about this camera and hopefully will use it.
September 27, 2020 at 3:24 AM 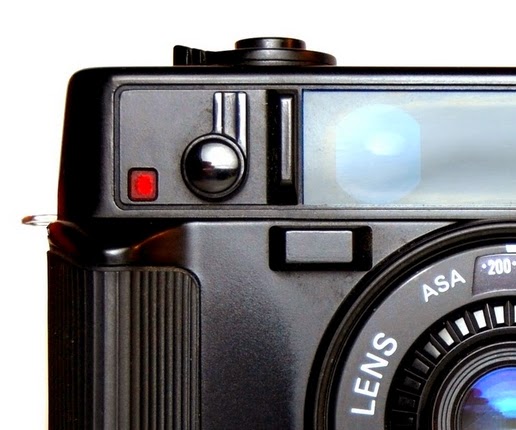 How to open a Nikon L35AF - in this case, for a shutter release and on/off switch repairs